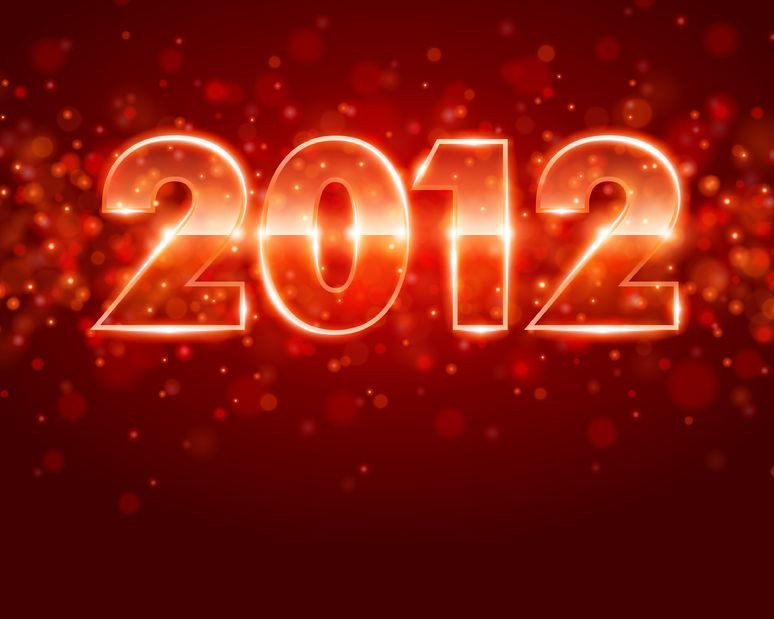 2012's New Year's Eve was cold here in Israel! New Year's Eve is always met with a bang of fantastic fireworks. It's the time to have an excuse of kissing everyone at the stroke of midnight, gorging on food and drinks and observing superstitious beliefs to ensure that the New Year will be assured of good health and more fortune to come. Watching amazing fireworks is what I missed most for the past 3 New Year's Eve. Israelis doesn't celebrate the Georgian calendar so its kinda silent night here. A pity because watching amazing fireworks is a nice way to say goodbye to the old year and a nice hello to the New Year.

Year 2012 is the year of the Dragon in Chinese astrology and it's a leap year so we have 366 days instead of the usual 365 days. It's a time for those who were born February 28 to have a grand birthday celebration. And possibly according to the predictions, this year will be the end of the world! You don't believe it? Me too but.... Let's look first into some of the well-known predictions.

Regrettably, 2012 is full of doomsday predictions. All forms of media are full of information about 2012 that it's hard to separate facts from ridiculous hoaxes perpetuated by some people who want to cash in on these phenomena. Here are some interesting predictions that will titillate your mind. And sure enough, we human beings like a selection of menus regarding the end of time with our imagination running on full throttle. Please read it with an open mind and a little humor and keep in mind that these are just predictions.

The 12/21/12 Theory
The big date of the Mayan Calendar ends on December 21, 2012. This day is the Armageddon or End of Times that doomsayers love to exploit but some positive thinkers says it is instead a beginning of a new era, a rebirth of the earth. And we know that birthing is a very painful process towards a beautiful result. What makes this theory logical?

*Without going into too much technical terms, the Mayan calendar ends on 12/21/12 which is the completion of a 5,125 years of age. The Mayans believe that the world goes through chapters or ages. 12/21/12 also is the end of a 26,000 year cycle wherein the Earth passes through all the Zodiac signs in Astronomy. This date implies a big change which nobody knows and can only speculate. The Mayans didn't leave a clue on what to expect but let's believe instead that the best in life is yet to come.

*This date also coincides with the alignment of our sun, our planet earth and our Milky Way Galaxy which happens only after 26,000 years. The alignment presumably will cause disruption of gravitational forces causing enormous environmental destruction and it might even create a shift on the earth poles or move the axis of the earth. In short, there will be an abundance of earthquakes, tsunamis and other natural disasters like the death of 5,000 birds and 100,000 drums of fish in Arkansas, USA for no apparent reason. Ever heard also of the unexplainable crop circle theories too? As of 2011, we have seen our share of natural disasters causing massive losses of human lives and it's possible the worst is yet to come. NASA did confirmed that in 2012 there will be massive solar storms causing havoc’s on earth and that there is a deterioration of the Earth's Magnetosphere which protects our planet from solar storms. In short, the usual normal life that we know will become topsy-turvy.

*12/21/12 is also supported by other theories like the Web Bot program, a computer generated program that presumably predicted this date as the end of all days and the I Ching Prophesies, a set of hexagrams diagrams, also known as the Book of Changes by the Chinese, purportedly calculates this date too as the apocalypse.

There are also other proponents of doomsday predictions too but has not mentioned specific dates like the 12/21/12 theories but as usual doomsayers say it going to happen this year . Here are several of the prophesies.

Planet Nibiru
Some doomsayers say that this planet Nibiru will slam into earth from outer space causing the annihilation of life on planet earth like what happened to the dinosaurs. Well, asteroid Eros 443 will pass the earth on January 31, 2012 at a distance of 26,729, 000 km and might be a possible earth destroyer. NASA hasn't issued any warning so far. Well, if this happens, your bones or my bones will be one of the fossils after a million years for future anthropologist and paleontologist to study.

Nostradamus Prophecies
Nostradamus has predicted the two anti-Christ with unerring accuracy according to his followers who studied his predictions: Adolf Hitler and Napoleon, the Sept. 11 attack, and several others. He predicted that the third Anti-Christ will come from Arabia and his name will be Mabus and is the personification of evilness worse than his two predecessors. It's amusing that the US Naval Secretary has a family name Mabus but good to know he is not from Arabia. There are several speculations regarding the Mabus puzzle. It is speculated that Mabus is Iran President MAHhmoud Ahmajinahed and former President BUSh or perhaps OsaMA Bin Laden will reappear and fight the US. It was Bin Laden who so far made a direct terror attack on US territory. Also speculated is that Mabus can be PLO president Mahmoud Abbas. The PLO is playing the underdog to the hilt gaining worldwide support stealthily while presumably amassing billions from donations, extortion and other illegal means. With this back-up money, can the PLO spark the WW3 that leads to the beginning of the apocalypse? A world war caused by religious ideologies? A strong alliance of Islamist leaders whose main vision is the disappearance of Israel would surely ignite a war: Christianity and Judaism against Islam. As of right now, the Middle East political weather is slowly getting hotter keeping in time with NASA's prediction of the sun's solar flares that will create enormous chaos on earth. Nostradamus predicted that the 3rd Anti-Christ will use natural disasters to propagate his black propaganda thereby appearing as an angel camouflaging his evilness. It gives me constipation to even dwell on this possibility since I am currently working here in Israel!

The Book of Revelations has no specific date although it is full of horrifying events and images. It has a description of a nuclear world war or the effect of an asteroid or comet hitting our planet earth. The book describes humanity's destruction by war, famine, death and conquest. Considering the current political status in the Middle East and North Africa, it just might be the trigger to an apocalypse. Bottom line of the book of Revelations is that it is a battle of the good and evil. And it is creepy to know that the Anti-Christ is represented as a Red Dragon in the Book of Revelations and 2012 is the year of the dragon in Chinese astrology.

There are more predictions like the numerical symbolism of 12.21.12 which when translated into our modern alphabet, it read as AB.BA.AB and to read it the Hebrew way from left to right its BA.AB.BA which means “Father comes”. The Christian believers would surely champion this. It certainly beats the other predictions.

That's it, folks! Whether you believe or not and question the validity of these predictions, it's still an amazing believable coincidence of different beliefs that’s points in one direction: Year 2012.

So is 2012 the beginning of the end of the world? Nobody knows but for sure let's not take the predictions for granted but BE PREPARED for anything that will happen. Digging a fortified hide away is not the answer. All we can do is live each day to the fullest in harmony with nature and human race because the end CANNOT be predicted. But on the other hand, a WW3 triggered by religious factors just might become a possibility in the Middle East. May God forbid, Amen!