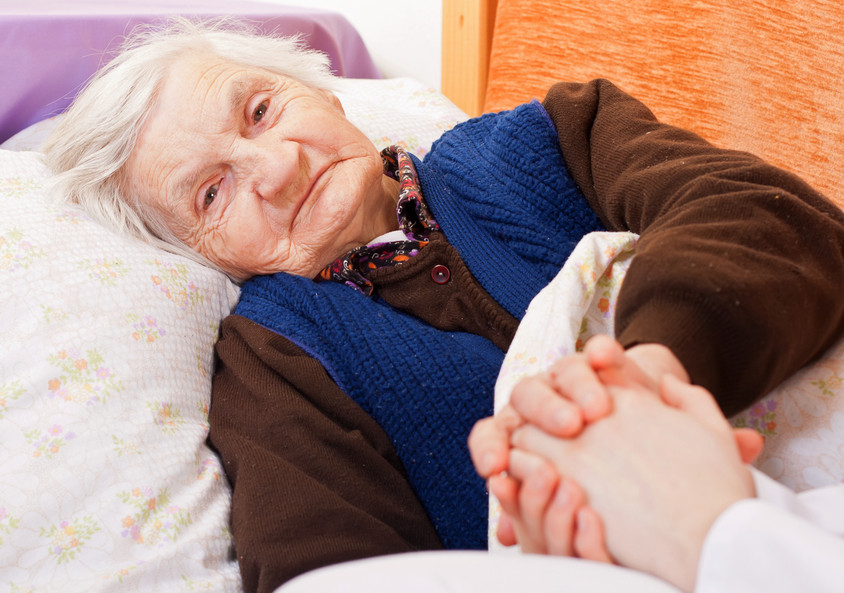 Discharged out of the hospital

Looking at her so small, pitifully thin with her collar bones poking out of her hospital gown in the middle of the hospital bed brings to mind a quote about life: “enjoy life now - it has an expiration date!”

Her situation wasn’t getting better. She was just hanging in there with her vital signs going up and down, up and down. There was nothing the hospital can do except to transfer to a hospice home because definitely I cannot cope alone at home even though it is my preference and her preference. The painful fact was that she was awake and still understands a little of what is going on. The doctor asked her if she wants to go home, she nodded but when the doctor spoke again to tell her she will be transferred to a hospice home, she look at me and her head moved slightly like saying no. I cannot meet her eyes and had to look away. By that time she cannot speak anymore, but I was holding her hands and I felt her squeeze my fingers lightly. The feeling of helplessness was choking me. The hospital arranged everything; the family agreed and approved whatever arrangement is made.

So by ambulance she was transferred to a hospice home. And what a hospice home! I thought a hospice home is a place where it’s calm and comfortable. My skin still crawls whenever I remember my first step into the building. The awful smell of the place... the smell of hovering death, decay and hopelessness permeated the air. I wanted to scream to the driver to load the stretcher again with my employer and get the hell out of that place but instead I swallowed the bile rising up and deal with the necessary papers. The space that look like a receiving area is designed like a creepy funeral parlor that is decorated with fake flowers in bronze holder and gray colored seats and the ambience of the place is for a funeral wake... never mind!

My mind was shutting down, I didn’t hear what’s next but the ambulance driver started to push the stretcher to the elevator so I followed numbly. Inside the elevator, I got another freaking shock. The elevator is designed to accommodate stretchers, not humans. But what really shocked me was that the elevator looked like a coffin, the walls are made from shiny dark brown wood and brass safety handles on the side are in bronze colors. Try to understand that this is a common design for coffins from my country and it was freaking me like I was inside a coffin or a tomb.

I was already numb when we arrived at the designated floor and was shown to a room. Everything inside of me was protesting and emotions were clawing to get out. There were two other occupied beds. Malka was transferred like a sack of potato on the empty bed and I can see she was grimacing in pain. She doesn’t weigh more than 38 kilos! She was skin and bones and the two women were very rough. The bed looks like it was a leftover from the time British occupation based from the rust and model. Even the bed sheets are an eyesore, old and with mold spots. After the women leave, I rushed to open the window for some fresh air and tried to make Malka comfortable by rearranging her legs the way I know she’s comfortable.

I looked at the other occupants of the room. One lady was pasty white, sitting up and was looking back at me somberly. I soon found that this lady cannot lie back due to a broken hip, she sit up 24/7. One old lady was full of bleeding sores and flies were hovering on the air around her while she goes on picking on her sores with beautiful elongated fingers, muttering and muttering. I had nowhere to sit so I was walking around and so I approached her bed, only to gagged from the smell emanating from her bed. I run to the bathroom to find that the bathroom is even worse. Urine bags were left to drip empty on the toilet and the garbage bin was overflowing. No tissue, no soap. I had nowhere to go and I just wanted to sit down, scream and bawl my eyes out. I avoided looking at the old women, instead I went to the window and stuck my face out. Even the view outside was dismal with old, gutted uninhabited buildings the only view to see but the air was fresh.

My hands were shaking, my tear ducts were ready to burst. I didn’t realized I was standing there for more than 2 hours trying to get myself composed when one of the women, an Arab, came in and informed me she is the nurse and left a pitcher of water on the small table. The glass pitcher almost ruined my hard won composure. The glass color of the pitcher has turned brown from old age and hardened unscrubbed grime.

It took another hour for the nurse to come back and put her feeding tube. By this time, she hasn’t got anything inside for almost 24 hours except for the small amount of saline that the hospital gave her because her blood pressure was very low that morning. A sympathetic nurse admitted to me in passing that with a bp like that, it’s just amazing how she was still awake.

She was given liquid food and water by feeding tube and extreme patience is needed to be exercised because while the liquid food is going inside, the stomach is rejecting it therefore she has difficulty keeping it down without regurgitating. Very messy but my conscience doesn’t allow me to just let her die from hunger. I know.. I know that it was useless but she was lucid and even hears and understand when I assure her and tell her lies that everything gonna be alright with a smile. Her small nods and slight smile of her lips were playing havoc with my conscience.

I cannot imagine how I went on smiling and talking like normal while she just looks at me. That’s the hardest thing, meeting her unflinching stare and acting like it’s normal. I spent time holding her hand until she sleep and I had to leave. I didn’t know where the stairs are so I had to use the fucking elevator.

I didn’t want or mean to be so discriminating but maybe, just maybe my expectations about a hospice home were a little bit too high. Well, for God’s sake this is Israel, not a third world country! I went home and went on a food binge. Eventually my body slept from exhaustion but my mind didn’t, turning and churning and expecting my phone to ring from the hospice.