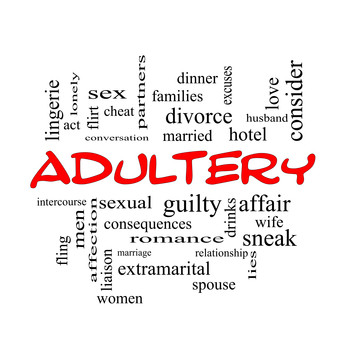 Adultery is defined by Wikipedia as an act that is “Extramarital sex that is considered objectionable on social, religious, moral or legal grounds.” In our society today, it seems like a tolerated act. However, just because it’s a widespread and tolerated act, it does not mean that adultery is a pleasure that a couple can indulge in without consequences.

There are so many reasons why people commit adultery. In the context of OFW’s away from home, here are a few reasons why they allow themselves to fall into it:

1.  The Distance. Working so hard for a family in the Philippines, and sending all of one’s income can be exhausting. Sometimes, an OFW would want to just kick back and escape life’s problems. Some pursue extramarital relationships because the distance and the personal burdens get too overwhelming.

2. Influence. In the pursuit of fun and relaxation, OFW’s form communities and friendships in groups. Some find that these groups are refreshing, but that there are members of the group who may have different values. OFWs’ formerly conservative standards erode over time, because of their group’s influence.

3. Money. Shockingly, some OFW’s who are in adulterous relationships are in it for the money. Sadly, some of the parties in affairs are single, and have no one to send money to. Thus, they can freely spend their income on pursuits that make them temporarily happy. Their married partners take advantage of the situation and send the extra money home to their own families.

Reading these reasons may be a bitter pill to swallow for most. But stay with us for a few bullet points more, as we give you the things that will be most affected when one enters an adulterous relationship:

1. One’s marriage. Adulterous parties could rationalize that their spouse was “never there for them,” “doesn’t use my hard-earned money wisely,” “probably commits adultery, too,” and other such reasons, but these are still lame reasons why one would enter into adultery. There was a reason why one marries their spouse, and hopefully that reason was love. Is that love really so easy to throw away with an adulterous relationship?

2. One’s family. An OFW goes abroad, risks his or her safety in a foreign land, as well as endures the loneliness and isolation of separation from their families in order to provide for them better. With these sacrifices, is it really worth burning all of these to the ground with the temporary pleasures of adultery?

3. One’s children. There are numerous studies made on the impact of absentee parenthood on the children of OFWs. Committing adultery worsens the impact on one’s children, putting them at risk for exhibiting delinquent or self-destructive behavior.

According to “OFW Children: Wanting For More Attention,” a study published in Development Research News of the Philippine Institute for Developmental Studies in 2008:

Overall outcomes of the study showed that, according to their guardians, less than 10 percent of OFW children are said to be "very happy". Two percent of these children are even considered to be sad and only 25 percent of them considered their relationship with their parents as "very good". Fifteen percent of children of non-OFW parents, on the other hand, are said to be "very happy" and 33 percent said their relationship with their parents is "very good".

This certainly is very telling of the impact of the dynamics of being an OFW family. These results were gathered from the children of OFWs who may or may not be in adulterous relationships. Given the fact that distance alone can have a negative impact on one’s children, think about the bigger impact that adultery can create on children who do not have parents who are physically present to guide them.

These points hopefully feel like a splash of cold water on all of our faces. Knowing that the ones we love are going to be affected by the actions we choose to do is something that will hopefully make us see the impact of an adulterous relationship. It is not just about fun. It is not just about temporary comfort. It’s not even about the extra income. An adulterous relationship potentially burns to the ground everything an OFW works for.

This is why one should think before they plunge into an act or even a commitment that they will forever regret.