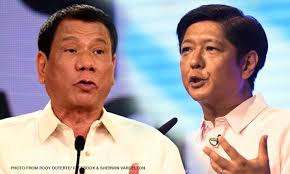 As of 8pm Philippine time, Rodrigo Duterte is leading the presidential race with over 10 Million votes from 58% of precincts reporting. Senator Grace Poe however, is trying to catch up for she is at the second place. However, Duterte's almost 5 Million lead from her is giving her team a hard time to be positive at the moment.

Rodrigo Duterte when asked about his opinion about the result said that he will wait for the last vote to be counted before being confident of victory.

Ferdinand Bongbong Marcos on the other hand is enjoying his top spot with over 1 Million votes ahead of his rival, Leni Robredo. Duterte's Vice Presidential bet Senator Alan Cayetano came in third followed by his rival Senator Chiz Escudero.

Duterte is more concerned of Cayetano's numbers in the poll. Duterte added that he has no problem working with anyone else if Marcos will win.

"As a government employee, I can always work with anybody. Walang problema ho 'yan (there's no problem with that)," Duterte told Rappler.

"This is not my property. This is the Republic of the Philippines and whoever is elected by the people to serve, we must work together," he added.