The OFW Identification Card: What We Need To Know | iSavta

iSavta Blog / Work Abroad / The OFW Identification Card: What We Need To Know

The OFW Identification Card: What We Need To Know 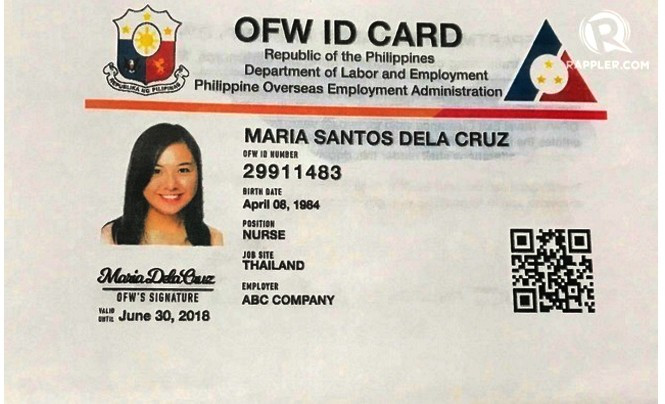 Last July 12, 2017, the government initiated the soft launching of the OFW ID Cad, which is intended to replace the Overseas Employment Certificate or OEC. The said ID Card will be issued soon to all Overseas Filipino Workers.

“This will serve as your OEC…so they don’t have to go to the POEA (Philippine Overseas Employment Administration) every time they go and come back. All they have to do is to show their ID,” Labor Secretary Silvestre Bello III said.

During the soft launch,  Bello said that the OFW card will be free of charge. But some OFWs stumbled upon some fake news online that the i-DOLE card will costs them around 500 pesos plus additional charge of 200 pesos for postal delivery. Secretary Bello clarified that these amounts and news were not true.

However, Bello since clarified that is absolutely free for OFWs but the foreign employers will actually pay for it. It is then confirmed by the secretary that the cost will be more or less 700 pesos, about 3 times higher than the cost of the OEC which is only 200 pesos.

The Department of Labor will make sure that the card will be free for OFws for they will arrange the costs with the foreign employers. "This is President's Duterte's gift to the OFWs. No OFW will pay for the card", Secretary Bello said.

As of the moment, the card is still a work in progress. All government agencies under the POEA, Bureau of Immigration, DOLe, DFA and others will still use the OEC for its OFW services. It is not mandatory for now to have the i-DOLE card until further notice or until the card is fully activated and mandated by the government.

The target date for the official and international launch of the OFW card is August 2017. The oFW can avail of the card from any POEA regional offices, DOLE building in Manila and from Philippine embassies all over the globe.

The government is planning to streamline the i-DOLE card to be used by OFWs to any if not all transactions including SSS, OWWA, Pag-IBIG, Philhealth and eventually with OFW Bank. The card will serve as an ATM and will be linked to the OFW Bank. They are also planning to make this card to serve as a substitute to the passport which is highly unlikely because of our passport law in the Philippines.

OFWs however, criticized the government or announcing the IDs without clear guidelines..

“How could it be the ‘best gift’ when even the DOLE is clueless on its relevance? There is as yet no implementing guidelines on how it is supposed to function,” Migrante International’s spokesperson Arman Hernando said in a statement.

OFWs from Saudi Arabia and Dubai also irked on the implementation. Some of them even tried to avail their own ID through the iDOLE website, only to find out that they were being charged with Php501 for the card and another Php200 for the delivery.

“Many OFWs welcome the iDOLE/OFW ID card. But upon knowing now that there will be fees on getting it, then we would probably chose not to avail the iDOLE OFW ID,” Monterona, an OFW from Saudi said in a statement.

Bello insisted that the IDs will be free for the OFW, with either the recruiting agency or the employer paying for it. "It depends with the talks between the technical people but it could be that the employer or recruitment agency will pay - what’s important is that the OFW won’t pay for anything", he said.

The cost of the card and other details on issuance will be discussed by the government agencies this week.  We just need to wait for any progress on the talks and hopefully something clear and positive will come out from this. In the end, it is still the welfare of our OFws that we need to consider and pay attention with.