You are an educated voter. VOTE SMART! (The Philippine Elections 2016) 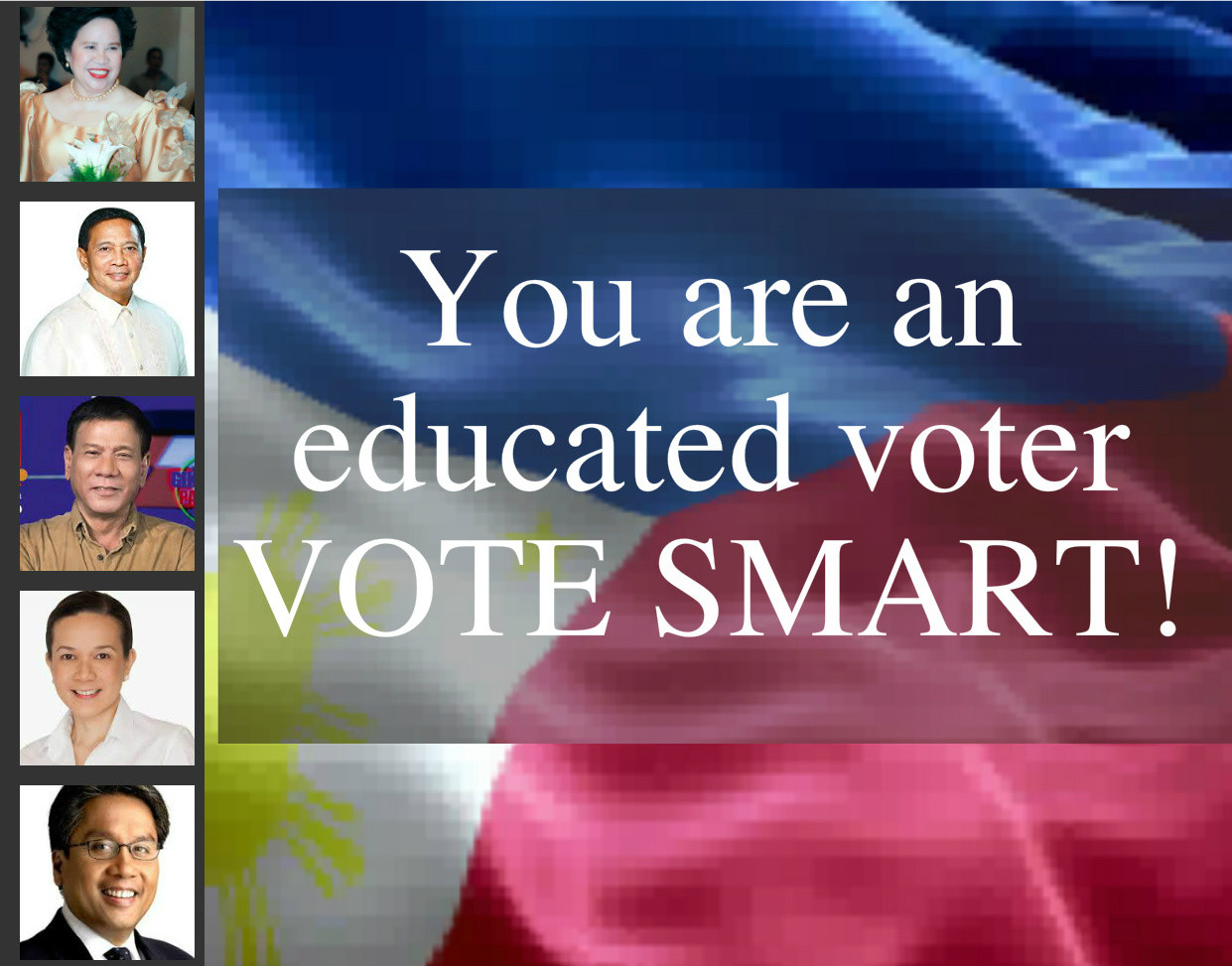 Are you a smart voter?

"What we really need in a corrupt country are honest leaders – with character borne out of higher education – will not steal the people’s money; will personally study national policy issues; if necessary, refuse to compromise; and will remain stubbornly noble and idealistic.  In short, we need a person with the courage of his convictions.  I am depending on you to provide this kind of leadership in the future, characterized by honesty, competence, and efficiency." Sen. Miriam D. Santiago, FEU, 2012.

The meat of the article are excerpts from the lecture of Sen. Miriam D. Santiago about elections and voters to FEU students in 2012. It is not a campaign for her on my part but she hits all the right notes in this lecture.

"Of the 50 million voters who will troop to the polls in May next year, the greater majority are not intelligent, they are not educated for voting, and the candidates they choose are not educated for serving.  This problem is the result of the fact that our Constitution provides that no literacy requirement shall be imposed on voters.  Furthermore, although the Constitution provides that a senator should be literate in that he should be able to read and write, the same Constitution does not require any educational attainment on the part of any candidate."

"If a policeman needs to have a college degree, why shouldn’t we impose the same requirement on senators and congressmen?"

So now we have action stars and comedians to draft our constitutional laws.

There was a spat on who graduated from what school the past few months. So far it is Sen. BB Marcos and Sen. Recto who got caught on one big fat lie on their educational attainment. Miss “AMALAYER” is nothing to this intentional deception yet nationwide she was put to shame.

What does a voter vote for?

Sen. Miriam D. Santiago quotes the rational choice theory of Anthony Downs.  That people will choose logic and common sense to make decisions that will provide them with the highest opportunity.

"In the Philippines, the voter chooses the candidate who will serve the voter’s ends.  But, unfortunately, the ends sought by the uneducated voter are usually: money in exchange for his vote; and an appointment in the civil service, so that he can have a job.  The uneducated majority are merely seeking their selfish individual interest, particularly in economic term.

There is this prevalent thinking that all the candidates are the same and will screw us anyhow. Why not enjoy the free money? Constantly bombarded with political news heavily influence our judgment reducing us to become so pessimistic and that bring us to the next topic.

The power of the media:

"What is the effect of the media on political attitude and voting behavior?  Ball and Peters give this answer: “The media may reinforce pre-existing opinion when they exist, but can shape opinion when there are not already firmly held values.”"

The internet does provides tons of free unmediated information, lacking sources and credibility.

"The problem with elections is that Filipino voters, if they are uneducated, are often swayed by the personal appeal of a candidate.  Public opinion is often shaped by conscious efforts of political elites and the media.  It is a myth that Philippine voters make rational choices of candidates.  Often, the uneducated voter is merely expressing support for the system, or merely expressing emotional attachments to certain symbols."

She goes on to say to the students “to practice Smart Voting- that candidates "should have a record of academic and professional excellence, as well as a record of moral positions on national policy issues.”

Where can one find such a paragon to become the leader?

The Election in the Philippines is like Disneyland. Mascots everywhere selling  everything they got while the voters are “shopping”. Please bear in mind that quality is rarely found in the discount bin.

All the mud flinging, the quarrelling on social media proclaiming and defending their "manok" is appalling. Election after election, we are fed the same crap and the masa are "lovin" it. The behavior reflects our intellect. So the leaders of our country panders in accordance to our behavior.

And we wonder what the heck is wrong with our government?! Oh my gawd!

Vote for a leader who is tenaciously committed to make the necessary hard decisions needed to bring our country function to its full potential.

We need a leader, not a magician, not a superhero.

Hope to see an injection of new blood in the government this coming June. Certainly, the dinosaurs in the Senate needs to be put out to pasture..

So you are voting for ____? Who cares! I read this line on facebook today, made me LOL.  Truth is, no matter who will sit in Malacanang when the election dust settles in June, my existence will still be from the result of my hard working hands.